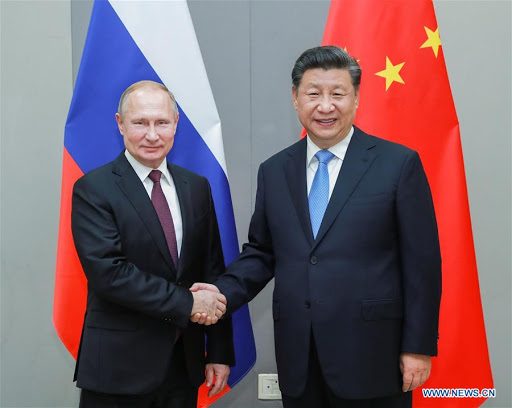 The coronavirus has exposed the weakness of the great institutions of the liberal world order. As has been written previously, the EU has largely failed in its response to this pandemic, whilst the US has dithered and delayed under a President who until recently believed that the whole thing was a hoax. In that vacuum have stepped two countries who are quite opposed to the liberal world order. Russia and China.

Both nations have sent aid to struggling countries such as Italy and Serbia, aid which has taken the shape of masks, ventilators and other such equipment has been greatly received by the governments of those nations with Serbian leaders even wanting to set up a monument to celebrate Chinese aid. In doing this, both China and Russia are counting on the public’s perception of them to change. China may have completely bungled its initial response to the pandemic and even tried to cover it up, but they stepped up to the plate and started shipping off aid to Italy, when the EU dithered and dallied and eventually refused to do so. That has got to be a strong image in the minds of the citizenry, their neighbours turned their backs on them but China and Russia, two nations they’ve been told by the elites to hate, stepped up and helped. No amount of negative press coverage is likely to make people forget that in a hurry.

Russia and China have also started taking control of the message being put out into the media over the best ways to handle the coronavirus pandemic. Firstly, though they have denied it, there is strong evidence to suggest that the Russians have taken to using disinformation campaigns to create doubt and confusion over Western governments responses to the virus and its origins. Why would Russia do this? Well, the answer to that could be found in Russian attitudes to the US supported liberal world order. Such an order is a threat to Russia’s sense of self and as such if they can sow doubt in the minds of western civilians they can potentially undermine the US’ hold over world affairs.

In this, the Russians have been aided either intentionally or unintentionally by China. China’s influence over the World Health Organisation is sizable and has come in for criticism as the full extent of the pandemic has become known. The organisation which is tasked with ensuring a coordinated response in times of a medical emergency such as now, has defended the Chinese approach to the pandemic including its more draconian measures, whilst criticising other nations for not doing the same. Why has the organisation stuck by China throughout all of this? Mainly because China’s influence has steadily grown alongside its economy whilst the willingness of the US to use its influence has slowly started declining. China was a big supporter of the current WHO director general Dr Tedros during his election campaign to the post in 2017, and consequently the man has parroted Beijing’s line on several key issues most pressingly the One China issue, which the man later confirmed was also the view of the WHO.

With the director general of the WHO indebted to the Chinese in such a manner, it is not surprising that the organisation has taken to parrotting Beijing’s line. Such is the feeling of good will this authoritarian nation harbours for the WHO that when President Trump criticised it, the Chinese came to its defence and claimed that the President and others who had criticised the organisation were doing so to deflect from their own failings. That countless journalists followed China’s line on this topic suggests that either their hatred of Trump is so strong that they can’t see the wood from the trees, or that they genuinely believe that the WHO is as impartial as it pretends to be.

However, everything is not a complete walkover for China and Russia. Not only are there tensions between the two nations over Russian treatment of Chinese citizens, both nations have struggled with the optics for their operations. As Chatham House notes, both nations are run by authoritarian regimes whose grip on power relies on power projection, consequently, any attempts at prodding their narrative for flaws results in angry backlashes from the associated governments. Combined with the faulty equipment that both nations have provided to European nations such as Italy, and it is easy to see why some would doubt their help and question whether they are truly as useful as they purport to be.

Russia and China are both experts at sowing disinformation and undermining trust in western institutions, this pandemic has given them a chance to step into the void left by an inefficient EU and lacklustre US. Their management of the WHO has also enabled them to garner positive coverage from a well respected body and perhaps earn an iota of trust from citizens. However, unless they can reduce their inefficient production methods and goods, a seed of doubt will remain about their ability to lead the world through this pandemic and afterwards. We should all be grateful for that.