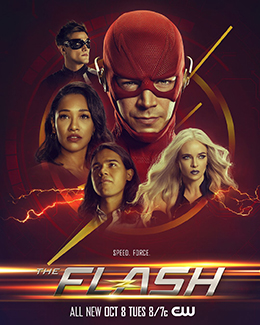 Season 6 has been one of the best seasons of The Flash arguably since Season 2, and that trend continues with Episode 6.

This episode focuses on three big things, the first of which is Nash Well’s attempts to get beyond the wall and into the Monitor’s secret lair. Wells manages to convince the team to help him by telling them that this is the way to save Barry. He plays on the suspicions that any decent person would have that the Monitor isn’t what he says he is, and we learn that the Monitor’s lair is guarded by Eternium, and that Wells needs to know where to dig, so needs ultraviolet light. Enter Allegra, in return for telling her about the multiverse and perhaps letting it slip that her boss’s husband is the Flash, and giving her a pep talk, Nash convinces her to help him. At the end we get the hint that she might well be similar to someone he knows. A hint that he is indeed Pariah?

Elsewhere, we see Chester P, the meta from the first episode come back, cured and healed. Cecile tries her hand at getting him a date, and when it fails, it fails with massive cringe. However, all is not lost. Chester rallies and embraces his new being and encourages Cecile to do so as well, and there’s even a hint of him joining Star Labs in the future. This to me suggests that the potential for Chester to come in as the new Cisco is being floated, it remains to be seen though.

Finally, we move onto the main set piece of this episode. Ralph and Barry heading off to find Sue Dearborn. We see them embrace a James Bond style detective narrative, which whilst cheesy is actually quite cool. As the episode progresses, we get to see a hint of the Black Hole gang-potential big bads for the back end of the season- and we also see Barry and Ralph working together. They manage to save the day, and Ralph gets named Central City’s new hero, whilst Barry is rewarded the medal of honour.

The episode ends on a cliff hanger though and sets up nicely for the finale of this big bad.

Watch the trailer below: