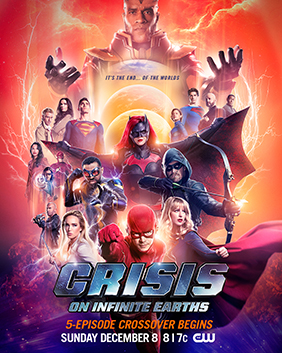 We begin in the past, with Mar Novu as a young man trying to find the beginning of time, we learn that he inadvertently allowed the Anti Monitor to learn of the multiverse, beginning the chain of events that took us to crisis.

We then venture into the vanishing point, where the Paragons-remember them?- are struggling to escape, eventually, through Oliver’s reappearance as the Spectre they break through. Travelling through time and space, they learn to deal with the troubles of old and bond together for the final fight.

And what a fight it is. Filled with energy, momentum and chaos. Oliver makes the final sacrifice and uses a key line to show just how awesome this cross over is.

Afterwards, the universe changes, as we enter Legends of Tomorrow, we see that the Earths have merged together and that Kara’s Earth and Barry’s Earth have always been together this time around. And though it appears all is well, soon enough, things take a turn for the worst.

Using Martian Manhunter’s ability to bring people’s memories back-the paragons kept theirs- worked very well, and enabled the team to properly deal with the shadow demons and with the Anti Monitor. Using a shirking bomb to force the Anti-Monitor into the micro-verse was a clever tool.

This crossover was a fitting finale and allowed viewers to truly appreciate how things have come since Smallville debuted in 2001. It will be fascinating to see how this impacts the shows moving forward.