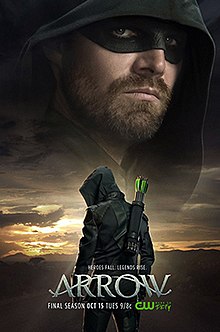 A return to purgatory for Oliver, and a venture to make the weapon needed to prepare the team for Crisis.

This season has been building up to this very moment. Oliver and the team deal with the usual heartbreak and panic. Lyla reveals how she came to know the Monitor and how long she’s been working with him. Her motives were good, but damn if this secret doesn’t end up ruining her marriage-of course it won’t nothing that happens here ever has long term consequences right?- and revelations that Oliver is going to die shock his children.

One of the good things about this episode was that they actually addressed the issues between Oliver and Mia. Instead of making her remain a sulky little idiot, they had William give her the speech to say that yes their dad might be about to die, but he’s doing all of this for them and they have to work with him, not ignore him. Seeing that realisation sink into her thick skull was good. Perhaps she’ll change now that she and Oliver have also finally patched things up. If not? Well that will seal the fate of the spin off.

Of course, as you might expect, despite the initial hurdle of the dead returning to life, the team triumph and the weapon is activated. With the surprise that it required Lyla’s DNA not Oliver’s. That was some perfect set up throughout this season to create Lyla as Harbinger. Seeing her disappear and then return right at the end to herald crisis sent chills down my arm. I do wonder how she and John will interact in the crossover.

This was a great mid season finale, and perhaps could be viewed as the actual finale for Arrow, given the rest of the show is dedicated to Crisis and setting up the spin off. Arrow has been a huge part of my life for the past five years, to see it go is sad, but at the same time it’s a sort of happy sadness. It will bow out on top.